You may need: Japanese Curry 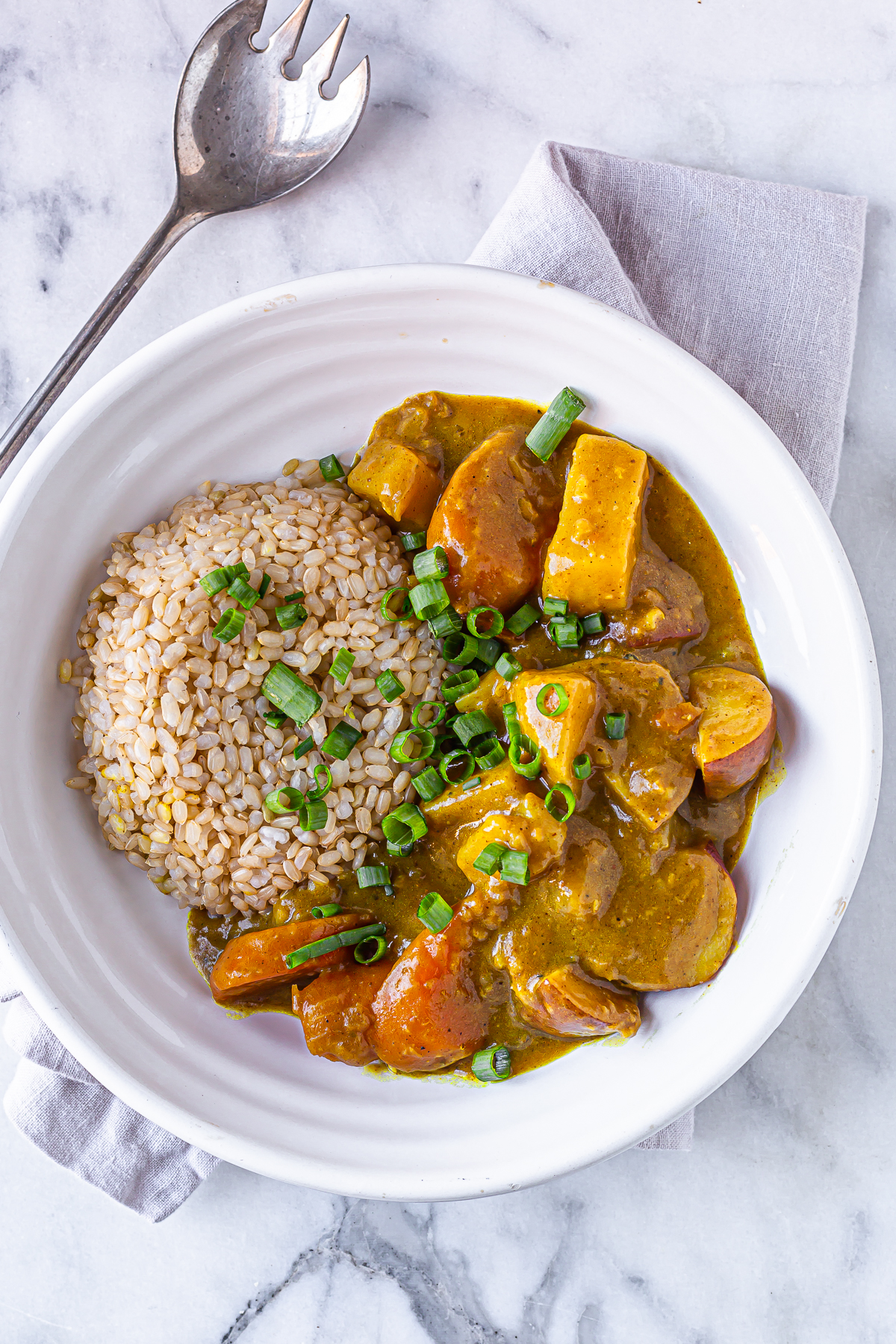 Unlike the hot and spicy Indian curries, Japanese curry is milder, with a touch of sweetness that balances the flavors. This Japanese Root Vegetable Curry is a vegan version of the ultimate Japanese comfort food dish packed with nutrients from hearty root vegetables.  Covered in a silky sauce and served with brown rice and scallions, it's a perfect dish for your next “Meatless Monday” that the whole family can enjoy. Japanese curry sauce is typically made a little thicker than South Asian curries, taking on the texture similar to a stew. Our recipe, we make the curry from scratch, first by making the roux. Roux is simply flour blended into a fat like oil or butter and is used around the world to thicken sauces, adding a creaminess and subtle nutty flavor. In Japan, you can buy curry kits in a box that have the spices and roux in the form of a bouillon-like cube. Making a roux is easy, but pay close attention to the pan to not burn the flour. If you (like we have before) burn the roux, throw out the roux and start over.

Our Japanese Curry spice blend contains classic warming curry spice flavors without the spicy heat. In Japan, curry with rice is considered a national dish, even ahead of miso and sushi! It is thought that curry was first introduced to Japan by British sailors in the 19th Century, who brought this dish from colonial India. Curry’s popularity grew in the 20th century, especially when the Japanese military used it as a convenient canteen meal to serve large numbers of troops. The Japanese Maritime Self Defense Force still offers curry every Friday for lunch, and many ships even have their own special recipe.

Japanese curry usually has a roux as its base. This is a mixture of oil and flour that have been cooked together to remove the raw flour flavor and to create a thick creamy base for the curry. Often in Japan it comes in the form of a dried bouillon like cube or packet, but it’s easy enough to make a roux from scratch!

For an extra nutty flavor, try toasting the flour in a dry pan before adding the oil!

The veggies in this dish can vary, but make sure that you cut them into similar sized pieces so they cook evenly. We especially love the turnip-it’s a truly under-appreciated veggie! The texture is creamy with a unique but mild flavor. And packed with vitamin C!

Feel free to personalize your curry with unique flavors like grated apple for a subtle sweetness, or a few pinches of our Korean Gochugaru for a hint of spice.

To make the roux, heat the olive oil in a small pan and add the flour. Stir well. Cook over low heat for 2-3 minutes. Turn off the heat and stir in the Piquant Post Japanese Curry. Set aside.

To make the curry, heat the olive oil in a medium sauce pan and add the onion. Sauté for 2-3 minutes and then add the garlic, ginger, carrot, turnip and baby potato. Sauté for another 2-3 minutes.

Add the roux, salt, rice vinegar, soy sauce and water. Stir well and bring to a simmer. Cook over low heat for 30 minutes or until the veggies are fork tender.