You may need: Tempero Baiano 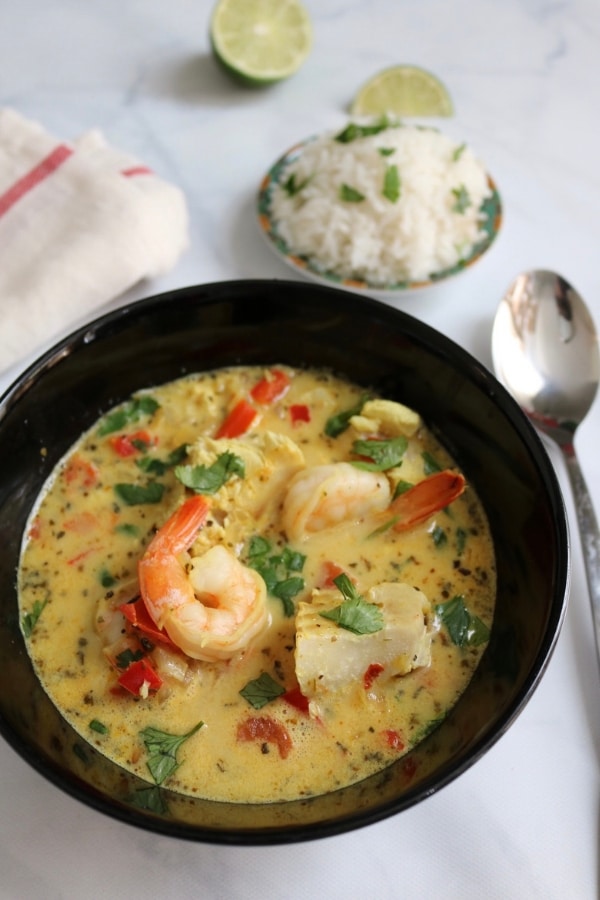 Brazil is a huge country with a diverse geography and nearly 5000 miles of coastline. Known for its annual spectacle Carnival and smiling people, it also has culinary riches in multitudes owing to one of the most diverse populations in the world. Most people think of Brazil in terms of its European, African, and indigenous roots. But today, Asian and Middle Eastern immigrant populations have seamlessly blended their traditions into the milieu making it a true melting pot of the world.

This recipe, called Moqueca ('Moo-KAY-Kah') in Portuguese, is a typical fish stew from the northern coastal state of Bahia. The climate in Bahia is tropical and, as you can imagine, seafood and tropical fruits play a big role in their dishes. Coconut milk is used in traditional recipes to provide a creamy slightly sweet base for this stew of white fish and shrimp. The Brazilian spice blend we use to make this dish is called Tempero Baiano. It's used to add zest and flavor to soups, stews, fish, chicken and bean dishes. It adds lovely herb notes and a mild heat profile from the red chili flakes and white pepper that, in soups, can slowly build as you work your way to the bottom of the broth. If you don't feel like making the full stew, try mixing some Tempero Baiano with olive oil and working it on fish directly as a rub before cooking.

This recipe works well with a a number of different fish varieties from halibut to cod. Ask your fishmonger or supermarket seafood assistant for fresh suggestions. If using a thin cut (e.g., tilapia, cod, etc) you won't be able to cut into cubes, but aim for fork sized pieces.

Cooking temperature matters in this recipe. You want to just heat the liquid to the point of a low boil then reduce right away to simmer the ingredients so you don't overcook the fish.

Cut fish into cubes and season with salt & pepper. If using frozen shrimp, thaw in a bowl of water. Place fish in a medium bowl. Stir minced garlic into lime juice, then pour over fish. Gently toss to coat and set aside while cooking onions and peppers.

Pour the entire bowl of fish and lime juice into the skillet on top of the vegetables. Then, add the coconut milk and broth. Stir to loosen any bits on the bottom and to thoroughly toss the fish. Fish should be mostly, if not entirely, submerged in the liquid. Bring to a very low boil, then reduce heat to Low. If the shrimp are uncooked, add them now (If they are pre-cooked, add them in the last 5 mins).

Simmer the stew on Low for approximately 10-15 mins until the fish is cooked through. Pour in bowls and garnish with lime wedges and cilantro. Serve with jasmine rice.