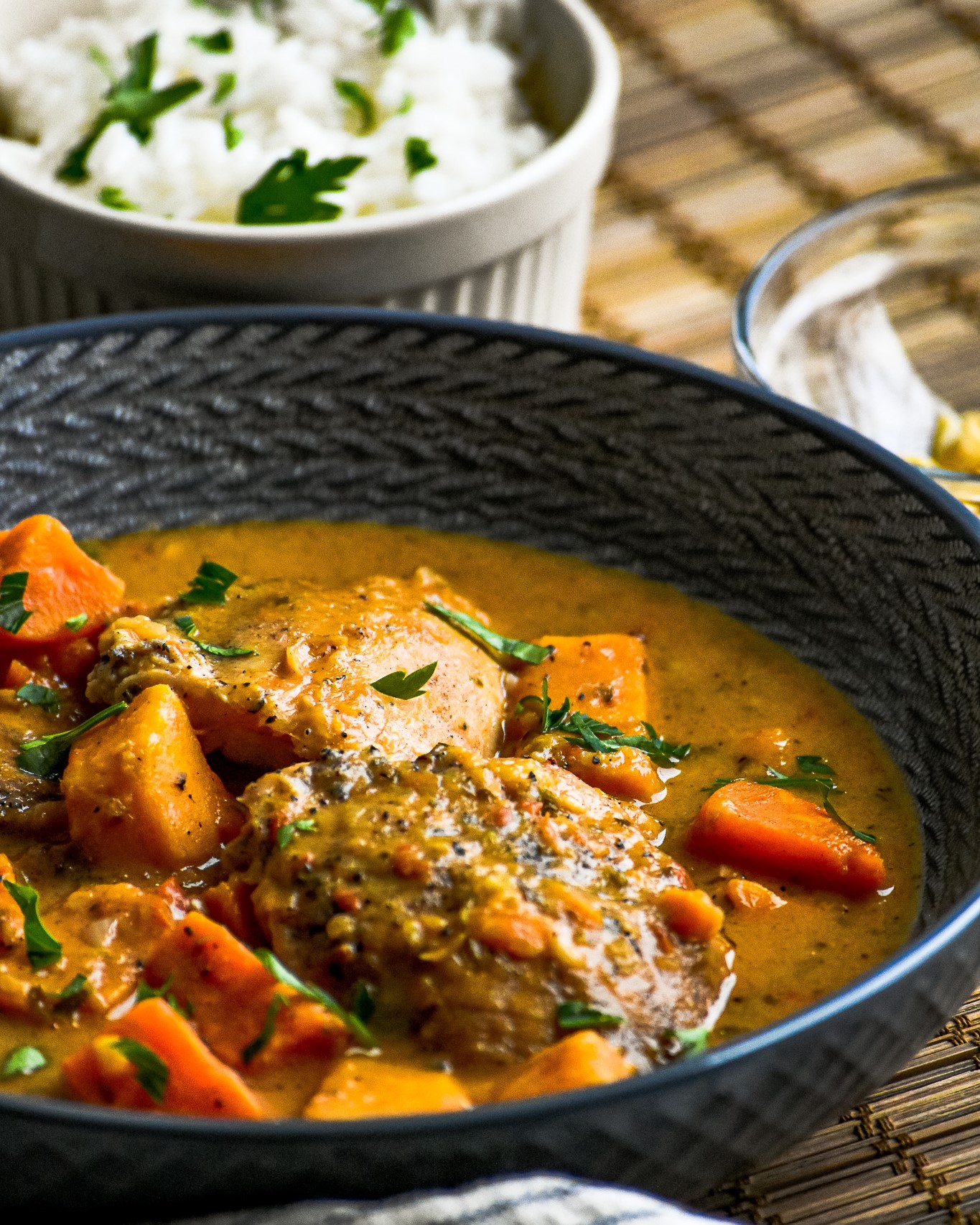 Popular in West Africa, Groundnut or Peanut stew is a delicious and comforting dish now enjoyed by the African diaspora all over the world. Made using peanut butter, a flavorful tomato broth and native spices, this soul-soothing delicacy is creamy and hearty with a distinctive golden brown color and nutty flavor. Groundnuts are very popular in African culture and are often eaten as a snack, tossed in salads and even made into peanut butter. They have served as a prime source of protein and nutrients for millennia, becoming a staple of regional African dishes and recipes such as this Groundnut Stew. Traditionally, a peanut butter for this stew is made from scratch by roasting the peanuts then hand grinding them into a paste. However, with natural peanut butter readily available in stores, skip that step and save some time.

Our recipe features a native West African aromatic spice called Grains of Paradise. This fragrant spice has notes of cardamom, ginger, coriander, citrus, nutmeg and juniper, all of which lend amazing flavor to this stew. The grains are slightly peppery and resemble whole peppercorns that can be used interchangeably with black pepper to flavor soups, stews and even steeped whole to make syrups for desserts. In this recipe, we grind the seeds use it to season the chicken thighs prior to browning, then later in the final stew to permeate the dish with aroma. In most cases Groundnut Stew is made with chicken, but for a plant-based version you can use mushrooms or extra firm tofu.

Grains of Paradise is a unique, aromatic spice that lends amazing flavor to this stew. Use it as a substitute for black pepper or even simmer it whole in sweet syrups when baking.

Be sure to take care when stirring the stew after you have added the scotch bonnet pepper so that it does not burst.

Soups and stews are even better the next day. Store any leftovers in the fridge in an airtight container where it should keep fresh for up to 3 days.

Start by grinding the Piquant Post Grains of Paradise in a pepper grinder, spice grinder, a food processor, or use a mortar and pestle. Season the chicken thighs with ½ Tbsp of ground Piquant Post Grains of Paradise and 1 tsp salt and set aside. In a food processor or blender, add the chopped onion, garlic, ginger, parsley and tomatoes and blend until smooth then set aside.

Heat the oil in a heavy bottom pan over High heat and brown the chicken thighs on each side for 5 minutes per side. Remove the chicken thighs and set them aside on a plate. Reduce the heat to Low and slowly pour the tomato mixture into the pot. Bring the heat back to Medium and allow the tomato mixture to simmer for 5 minutes stirring occasionally so that it does not burn.

Stir in the peanut butter until it dissolves then add the chicken stock and stir. Add the sweet potatoes, the remaining ground Grains of Paradise and chicken to the pot then stir. Nestle the scotch bonnet pepper in the pot then cover and simmer on Low heat for 30 minutes.

Check on the stew and stir occasionally to ensure that it does not burn on the bottom. Feel free to add more chicken stock if you prefer a looser consistency. Once the sweet potatoes are tender, turn off the heat and adjust the salt levels if necessary. Remove the scotch bonnet pepper and discard. Serve the stew with cooked rice and garnish with chopped peanuts and chopped parsley.