You may need: Taco Elixir 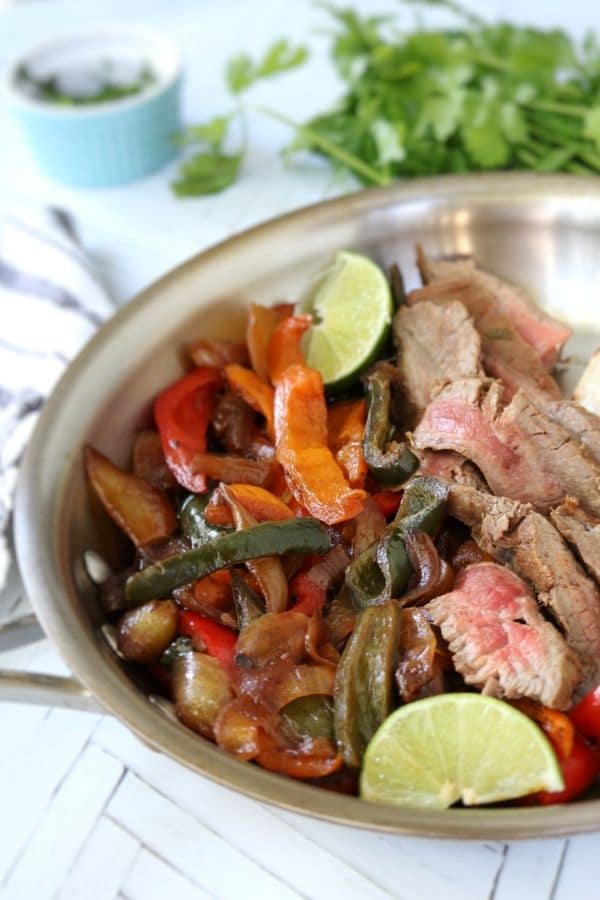 Today, Fajitas are widely known in the U.S. as a Tex-Mex restaurant staple, the meat arriving on sizzling metal platters, accompanied by mounds of grilled onions and peppers. However, Fajitas have an interesting story and reflect the reality and austerity of American border life in the early 20th Century. Out of the vast cattle ranch lands of South and West Texas, new culinary traditions were born from necessity.

Throwaway pieces like the head, entrails, and meat trimmings such as skirt steak were given to Mexican vaqueros (cowboys) as part of their pay. Many (now) classic Mexican border dishes emerged from the Rio Grande valley: barbacoa de cabeza (head), menudo (tripe), and fajitas (skirt). Lucky for us, enterprising chefs brought fajitas from backwoods campfire to big city food trucks in the 60's and to mainstream by 1990. The key to making flavor-packed fajitas is a good marinade for the steak and allowing the marinade to work at least a couple of hours. Citrus juices are natural acidic meat tenderizers that break down tough meat fibers. They also leave their fabulous flavor behind. We further infuse bold Mexican flavors in the fajita marinade with our Taco Elixir spice blend. This seasoning not only makes perfect beef or chicken tacos, it also takes these easy steak fajitas from good to great!

Fajitas are traditionally made with skirt or flank steak. Both work great in this recipe. You can also use the flatiron steak cut.

These thin cuts of steak cook quickly. If you prefer your meat Medium-Rare, watch the cooking time carefully.

Add all marinade ingredients to a large resealable plastic bag. Seal and shake to combine. (you can also use a non-reactive bowl).

Add the (whole) steak to the marinade and place in fridge for 2 hours up to overnight. You can marinate for less time in a pinch but for max flavor, we recommend you plan ahead and marinate for 2 hours. While the steak is marinating, prep all the fresh ingredients.

After the steak has marinated, pull the meat from the marinade and gently pat with paper towels. Season with salt & pepper to taste. Heat a large skillet or sauté pan on Med-High heat. Add oil to pan and cook steak for 3-5 mins per side (for Med-rare doneness; longer if desired). Remove meat and set aside to rest.

When the steak is done, cook the onions, and peppers for 10-12 mins on Med heat, stirring occasionally. When the onions begin to caramelize and the peppers soften, remove from heat. Slice the meat into finger-sized strips. Serve immediately (family style) with tortillas and garnishes of your choice: salsa, cheese, sour cream, lime wedges, guacamole, extra herbs.