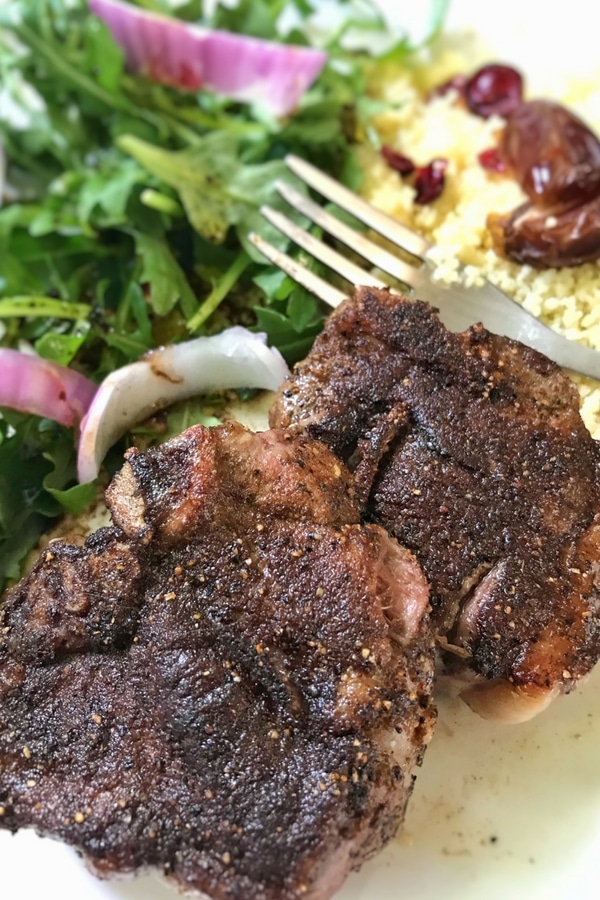 The flavors of Modern Arabic cuisine are the result of a millennium of perfecting the art of spice blending. Arab traders established many of the world’s most important ancient trading routes to East Asia, Africa, and Europe, bringing home exotic flavors, perfumes, and culinary ingredients for local chefs to experiment and combine flavors. This lamb baharat recipe reflects this beautiful tradition.

Baharat is the Arabic word for ‘spices’, but is also the name of a traditional spice blend used throughout the Arab world, from North Africa to the Persian Gulf. There are many regional variations of Baharat, but we include the Lebanese version to match our theme this month. Most forms of Baharat start with a base of black pepper, coriander, allspice, cumin with varying amounts of the warming spices cinnamon, cloves, nutmeg. Baharat, also known as 7 spice, is a versatile blend traditionally used to season lamb, chicken, beef, fish, and stews. Try sprinkling this blend on your favorite meals for a delicious and exotic seasoning.

Lamb chops cook quickly. Our recipe calls for searing the chops in an oven-safe skillet then throwing the pan in the oven to roast. Typically 6 minutes in the oven will get you Medium-Rare. Try 8 minutes to achieve Medium (longer for Medium-Well).

Couscous cooks very quickly. We like to bring the water to a boil first, stir in the couscous (per the package instructions), and add dried fruit. We then cover and immediately remove from heat while we finish cooking other items. It’s a simple way never to overcook your couscous.

Try a salad of arugula tossed in olive oil and balsamic vinegar on the side.

Season lamb with salt & pepper. Rub the lamb with Baharat spice. Preheat oven to 350 deg. Boil 1 1/3 cups of water in a saucepan for the couscous.

Heat an oven-safe skillet on Med-High and add oil. When pan is hot, add lamb chops. Sear for 2 mins then flip and sear other side for 2 mins.

Place skillet in oven and cook lamb for 6-8 mins (for Med-Rare to Med). When water is boiling in sauce pan, add dried fruit, couscous and olive oil. Stir, cover, then remove from heat.

Remove skillet from oven. Fluff the couscous with a fork and plate with lamb. Garnish couscous with 1 tbsp almonds or other chopped nuts.