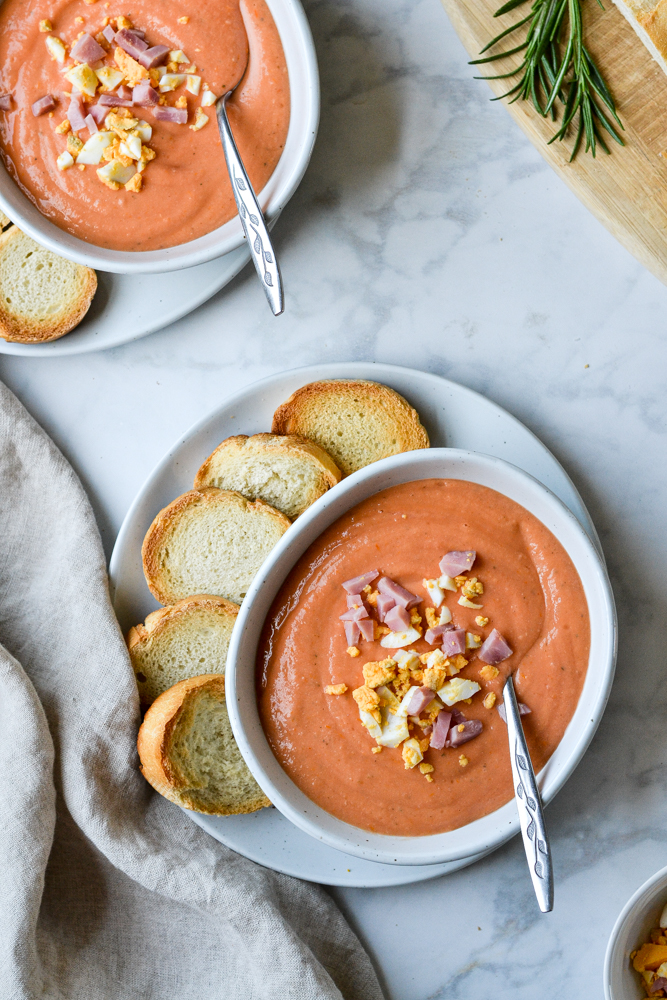 When you think of cold soups, Spanish Gazpacho is probably top of mind. And we have GREAT gazpacho recipes to try like this Spiced Green Gazpacho. But there's another delightful Spanish cold soup called spiced Salmorejo (sal-more-RAY-ho) from Andalusia in the south of Spain. Córdoba, a major city in Andalusia, is an ancient city with evidence of settlements dating to at least the 8th century BC. Córdoba has the highest average summer temperatures of any city in Europe with average daytime highs running close to 100 deg F (37 deg C) in July and August. Andalusians and, frankly, all Spaniards, enjoy cold, satisfying soup to cool down on the hottest summer days.

Our Spiced Salmorejo is a creamy, thick tomato soup with hints of fennel and herbal notes. Salmorejo gets its creamy texture from the emulsion of olive oil and the tomatoes. The thick structure of the soup is created by blending in bread. Now you have a recipe on hand to use up that stale half of a baguette instead of throwing it away! Add some chopped hardboiled egg and ham or bacon and you have a delicious and healthy summer meal that won't bog you down on hot days. For the most authentic taste, don't skip the sherry vinegar which adds a distinct Spanish touch.

We recommend vine-ripened tomatoes, and the juicier the tomatoes, the better! If you don’t have tomatoes on the vine, Roma or Heirloom will also work. The better quality tomatoes you use, the better

Our Spiced Salmorejo is perfect for hot summer nights and busy weekdays. Quickly throw everything in the blender, and have a glass of wine while the soup chills.

Have you wondered what to do with a stale baguette? The classic Spanish recipe uses leftover, stale bread!

Cover and refrigerate until the soup is cold, at least 30 minutes.

Serve with chopped boiled eggs and bacon or ham, and toasted baguette slices. Drizzle a little olive oil over each bowl.