You may need: Mexican Adobo 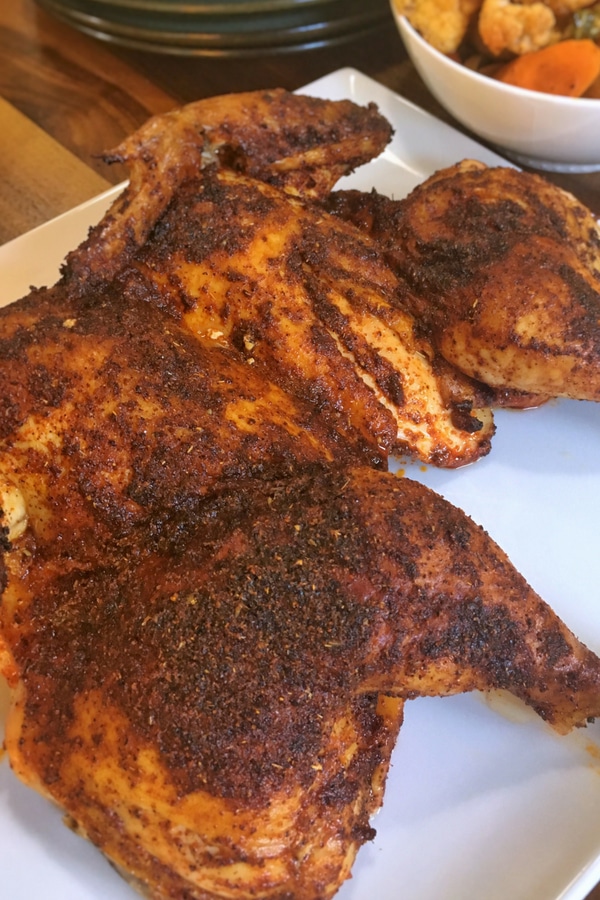 Mexican adobo is one of a number traditional Mexican rubs and sauces that are made from a base of dried, ground chili peppers along with different proportions of spices and fresh aromatics. If you’ve ever opened a can of chipotle peppers, adobo is the red sauce that bathes the peppers. However, adobo sauce is not terribly spicy (unlike chipotle peppers) and its rich depth of flavor makes it a star in its own right.

Mexican adobo is also distinct from its better-known Filipino cousin, which features a prominent vinegar and soy base and no dried chili peppers. Our adobo spice blend is used to make the perfect marinade for roasting any meat. Ancho chili peppers and paprika give the distinctive red color while hints of Mexican oregano and cinnamon creates a sweet, bold flavor, enhanced after some time in the oven. An adobo whole-roasted chicken is an easy treat to make, especially when you can cut the cooking time down by butterflying the bird, which is to remove the backbone and cook lying flat. Use your favorite hearty, seasonal vegetables for a healthy “one pan” meal.

This recipe introduces a technique called “butterflying” (also known as “spatchcocking”) a chicken. Basically you’re removing the breast bone to expose more of the meat directly to the heat to cook a whole bird about 25 mins faster. Learn how to butterfly a chicken in this step-by-step video.

You can use the adobo spice blend directly as a rub. We suggest a quick marinade so that the adobo adheres to the skin and you add a little citrus flavor.

Preheat oven to 425. Toss vegetables together with a light coating of oil and salt. Spread evenly on a large shallow roasting tray.

Prep the chicken by removing any innards and excess fat. Lay breast side down on a cutting board and starting at the tail end, use kitchen shears to cut along each side of the spine to remove the backbone. Then, with a knife score the cartilage down the middle of the chicken. Next, use your hands to pull sides backwards to pop out the breast bone which will enable the chicken to lay flat. You can remove the breast bone or leave in. Learn how to butterfly a chicken in this step-by-step video.

In a small bowl, combine marinade ingredients. Generously brush inside of chicken. Place chicken skin side up on top of the veggies, tucking the wing tips. Finish by brushing skin side generously with remaining marinade.

Roast for 50-60 minutes or until a thermometer inserted into thickest part reads 165. Cut chicken into pieces and toss roasted vegetables in pan drippings.