You may need: Lebanese Baharat 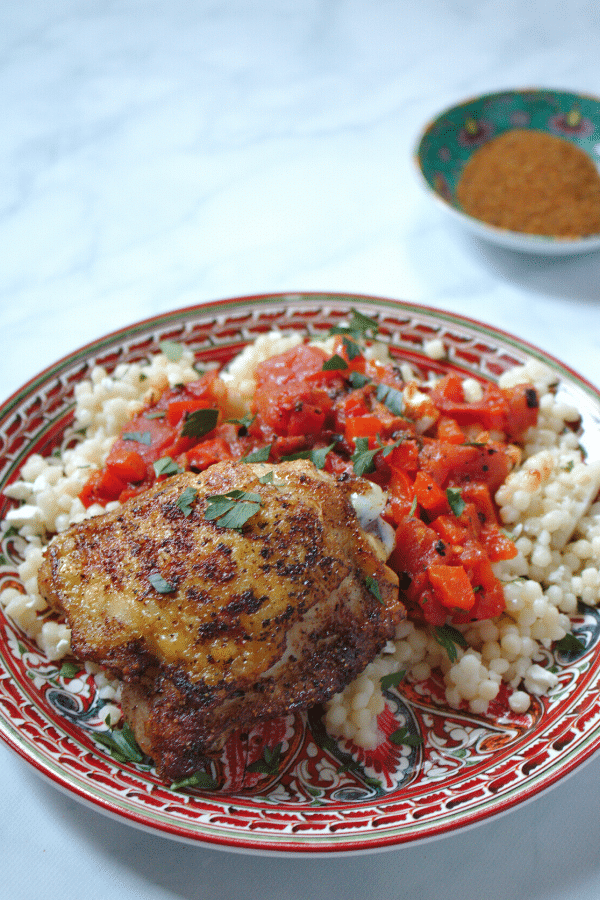 Busy weeknights demand easy recipes. We've found that pan roasted chicken develops wonderful flavor in no time. Try this Lebanese-spiced Baharat Chicken with Tomato and Couscous recipe to liven up a traditional weekday meal and have this on the table in 30 minutes or less!

The flavors of Modern Arabic cuisine are the result of a millennium of perfecting the art of spice blending. Arab traders established many of the world’s most important ancient trading routes to East Asia, Africa, and Europe, bringing home exotic flavors, perfumes, and culinary ingredients for local chefs to experiment and combine flavors. 'Baharat' is the Arabic word for ‘spices’, but is also the name of a traditional spice blend used throughout the Arab world, from North Africa to the Persian Gulf. There are many regional variations of Baharat, but most forms of Baharat start with a base of black pepper, coriander, allspice, cumin with varying amounts of the warming spices cinnamon, cloves, nutmeg. Our Lebanese version of Baharat, also known as Arabic Seven Spice, can be used to season lamb, chicken, beef, fish, and stews. Or, try sprinkling on your favorite meals as a condiment for a delicious and exotic seasoning.

This recipe for Lebanese baharat chicken with tomato and couscous recipe has multiple steps in ingredients. But, by following our recipe steps you can keep organized and cook the entire meal in under 30 minutes.

We like skin-on chicken thighs for this recipe as the skin turns crispy and keeps the meat juicy. You can easily use your favorite cut of meat instead. If you use boneless cuts, adjust the cooking time down 1 -2 minutes so as not to overcook.

Heat a pot of water to boil. Meanwhile, prep fresh produce. Heat a medium skillet or pan on Med-High. Add the oil and bell pepper. Sauté for 3 mins. Stir in the garlic and parsley stems and cook for 1 min. Stir in the tomatoes, vinegar, and sugar. Bring to a simmer. Turn down to Low and simmer for 10 mins until liquid reduces.

Once the pot of water boils, add couscous and reduce heat to keep a rolling but controlled boil. Boil for ~8 mins or until couscous is al dente. Drain and return to the pot. Add feta cheese and oil, then stir.

While couscous boils, heat a large skillet or pan on Med-High. Season chicken with salt & pepper and ~1/2 teaspoon of Baharat spice on both sides of chicken. Add to pan skin-side down first. Reduce heat to Med. If bone-in, cook for ~8-9 mins per side or until chicken is cooked through. Adjust cooking time down 1-2 mins for boneless pieces.

Serve feta couscous on a plate then spoon tomato sauce over top. Place chicken on the tomato and garnish with parsley leaves.