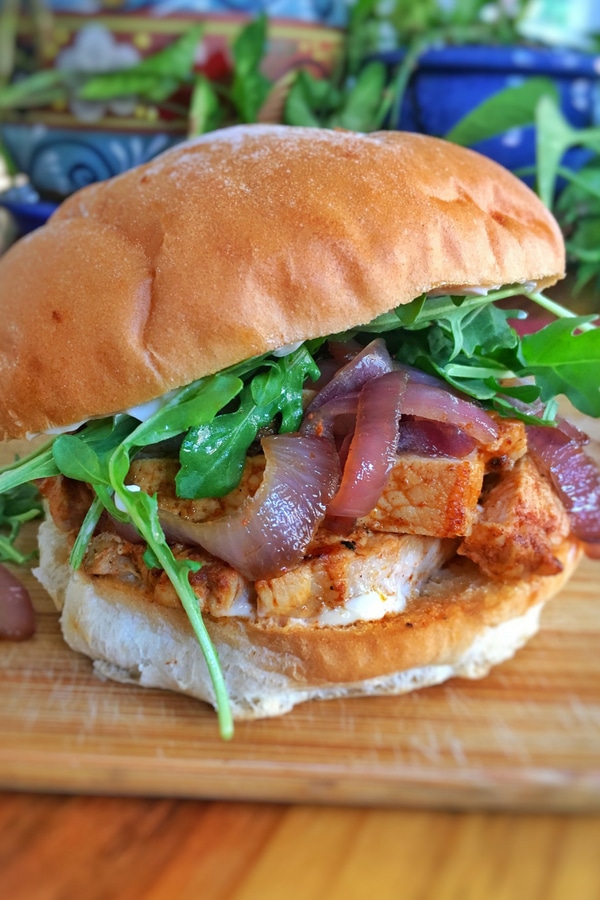 If you wan a quick bite in Portugal, then you'll likely encounter the Bifana ('BEEF-ah-na') sandwich. Made of a paprika-spiced pork with mustard on a soft roll, Portuguese eat these sandwiches like Americans eat burgers - anytime, anywhere! Just like burgers, there are lots of variations and toppings to customize your own.

In our Bifana pork sandwich recipe, a humble sandwich gets an upgrade from caramelized onions and a magical spice blend we call 'Portuguese Allspice' in a nod to Portugal’s far reaching historical empire that brought spices back from far corners of the globe. Allspice, Paprika and Ancho Chili were brought back from voyages to Central and South America while the exotic Cinnamon, Black Pepper and Ginger came from Portuguese dominated trade routes to Asia. Make a dreamy marinade in seconds using a few ingredients and the result is a mouthwatering pork cutlet Bifana - perfect for summer eating!

Pork cutlets are typically cut from boneless pork chops, but can also be from a pork loin. Pork cutlets are one of the leanest pieces of meat so avoid overcooking or they will quickly dry out.

For a quicker preparation after work, you can prepare the marinade and marinate the cutlets overnight. Be sure to cover and place in the fridge. Alternately, you can get good results by marinading in as little as 20 mins.

Combine marinade ingredients (except pork) in a medium bowl and whisk until smooth: spice blend, 1 tsp salt, mustard, garlic, and white wine. Add the pork to the bowl, coating all sides with marinade. Cover the bowl (or place in a large ziplock bag) in the fridge for at least 20 mins up to overnight.

To make the caramelized onions, first, halve the onions, remove the skin and slice into large rings. Heat a large skillet on Med with olive oil then add onions. Periodically stir the onions for 5 mins to prevent browning. Then, sprinkle in salt and sugar. Continue to cook for an additional 10 minutes or until onions are soft and sweet.

After the pork has marinated, heat a skillet on Med- High with olive oil. Add the cutlets to the pan letting any excess marinade drip off in bowl. Working in batches cook for 2-3 minutes per side. Bring cooked pork to a cutting board and slice into thin strips.

To assemble the sandwiches, cut bread in half and toast under the broiler. Spread may on top and bottom pieces. Start with the pork for the bottom layer and then sprinkle with a pinch of remaining Portuguese allspice spice blend on each sandwich. Top with caramelized onions and baby arugula.