You may need: Dried Persian Lime 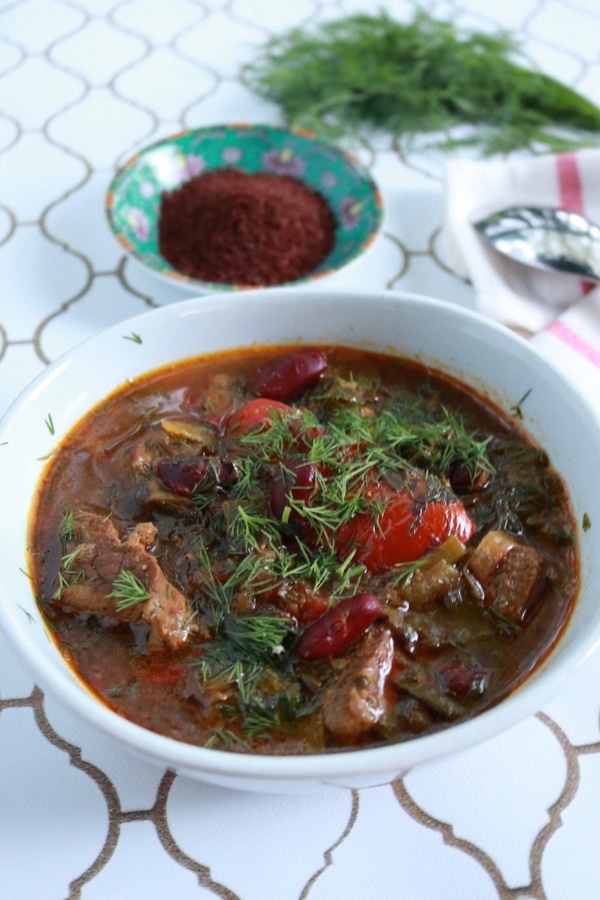 Almost every culture has a "national dish" that describes and may even define a culinary identity. In Iran, that dish is called Ghormeh Sabzi (GOR-ma SAB-zee). Roughly translating to "Fried Herbs" from Farsi, Ghormeh Sabzi (Kidney Bean & Beef Stew) is a dish that nearly every Persian grandmother has a recipe to make. Think of it as the ultimate comfort food, one that fills the home with delightful aromas and reminds us of family, like a Sunday roast.

A key ingredient in this dish is the specialty spice known as Dried Persian Lime. Often made from lemons or small limes that are boiled in salt water and dried until rock hard, dried Persian lime smells like a bolt of citrusy lightning when crushed or ground. They imbue the stew with a more complex flavor than lemon or lime alone and are a staple of Persian cooking. While immensely popular in the Middle East, dried Persian lime is not yet mainstream in North America except with serious spice hunters and in-the-know chefs (and Piquant Post subscribers!). If you're not quite up to making this stew, you can use dried limes in myriad other recipes such as braises, soups, or even in rice and lentil dishes. If you put them in your spice grinder, the resulting powder is a great finishing accent to roasted fish or veggies, soups, or seafood pasta dishes. Experiment and share the results with us!

An easy way to wash a lot of herbs at once is to fill a large mixing bowl with water. Then, soak the herbs and gently agitate to loosen any debris. Remove the herbs, then use a paper towel to pat and absorb the bulk of the water from the herbs.

To save a little time, stage your prep work so that you can chop while cooking: start by dicing the shallots so that they fry first. Then, you can finish chopping the herbs while shallots cook.

This recipe makes a family sized batch. This stew is great for meal prepping and can easily be frozen in portions for future use.

This Ghormeh Sabzi (Kidney Bean & Beef Stew) recipe can also be made in a slow cooker. For max flavor, you'll want to sauté the shallot / herb mixture and brown the meat before adding to the slow cooker.

The caramelized shallots used in this recipe are a common ingredient in many Persian dishes. As a timesaver, you can make a large batch and freeze leftovers for quick use in future meals.

Wash and prep the scallions, parsley, cilantro, and shallot. Remove any tough stems from the herbs, then finely chop. Heat a large skillet or sauté pan on Med and add 2 tbsp of oil. Cook the shallots for 5-6 mins then add the chopped herbs and scallions. Cook for 2 mins. Stir in the tomato paste and cook for 2 more mins. Remove mixture from heat and set aside.

Reduce the heat to Med-Low and discard onion halves. Then add 1 cup of water to pot along with herb/ tomato/shallot mixture, beans, and tomato quarters. Stir into pot. Cover and simmer for 15-20 more mins, stirring occasionally.

Remove pot from heat. Ladle stew in bowls and garnish with any extra herbs. Serve with steamed rice or crusty bread.