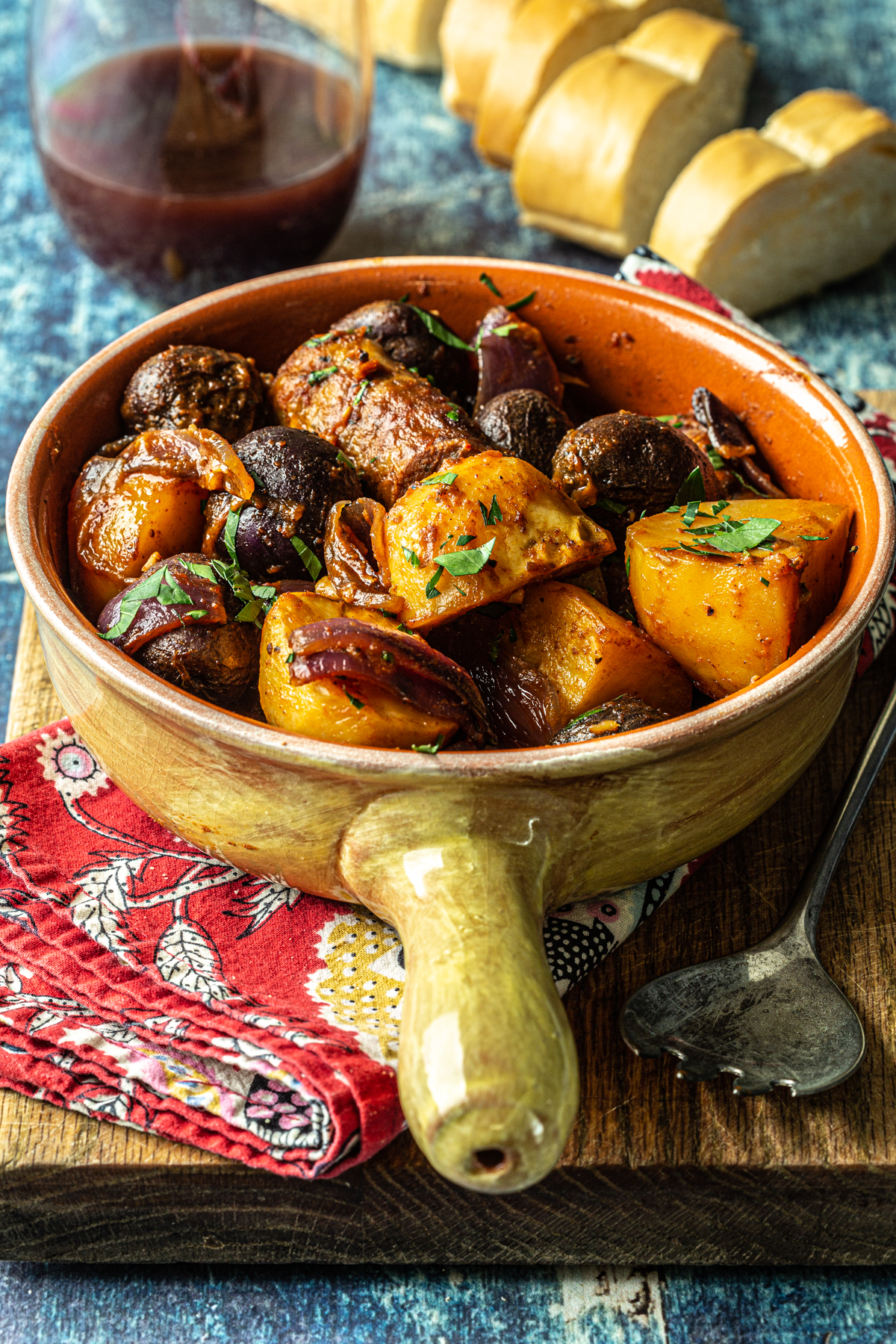 Portuguese Spiced Potatoes (Batatas Com Chouriço)  is a hearty and flavorful traditional dish that has a place on every Portuguese table! The potatoes are braised in a savory tomato and white wine broth until they are velvety and tender. The vegan sausage adds a rich depth of flavor to the broth as it cooks with the potatoes. The resulting liquid is perfect for sopping up with crusty bread.

The roots of many Portuguese dishes lie in humble peasant dishes spiced with ingredients obtained through global trade routes established by intrepid explorers. These Portuguese Spiced Potatoes are a perfect example of this interesting pair of influences. In fact potatoes originated in Latin America and are seasoned with exotic spices originally found in Africa and Asia, showcasing the global linkages of cuisine.

Chouriço is a type of sausage similar to Spanish chorizo but with less fat. Vegan sausage can be substituted and is elevated in flavor with our Chouriço Spice Mix! We recommend using a spicy vegan sausage if you can find one or just add a pinch or two of cayenne pepper to taste!

We love to serve this dish with crusty bread to sop up the delicious sauce that results from the cooking process! If you want more sauce, feel free to add a little more stock then called for in the recipe so you have a juicier dish!

The spice level of this dish is medium, but if you want a spicier dish add a little cayenne pepper (little by little to taste) to give it a nice kick!

We used a combination of baby purple potatoes and medium Yukon gold potatoes to make this dish. You can use either kind, or try a different kind of potato if you’d prefer.

Although we specified the cooking time, I recommend checking the doneness of the potatoes with a knife to the center. Also the chouriço should be firm and browned.

Preheat the oven to 500°F. In a large mixing bowl, toss the cut potatoes and onion slices with the olive oil and the Piquant Post Chouriço Spice blend to coat well. Place the potatoes in a 9”x13” roasting dish. Cut the sausages in half and arrange the pieces in the roasting dish, nestled in between the potatoes.

Whisk together the white wine, garlic, bay leaf, tomato paste, sea salt and black pepper. Pour evenly over the potatoes, onions and sausage. Add enough vegetable stock to the dish to cover the potatoes halfway. Place the dish in the oven uncovered,

Once the liquid has come to a boil, set the timer for 30 minutes and continue cooking the dish. When the timer goes off, remove the dish from the oven and turn the potatoes and sausage so they are evenly cooked on both sides. Return to the oven and cook for another 10 minutes.

Remove from the oven and serve with crusty bread and good red wine for a hearty and delicious meal!