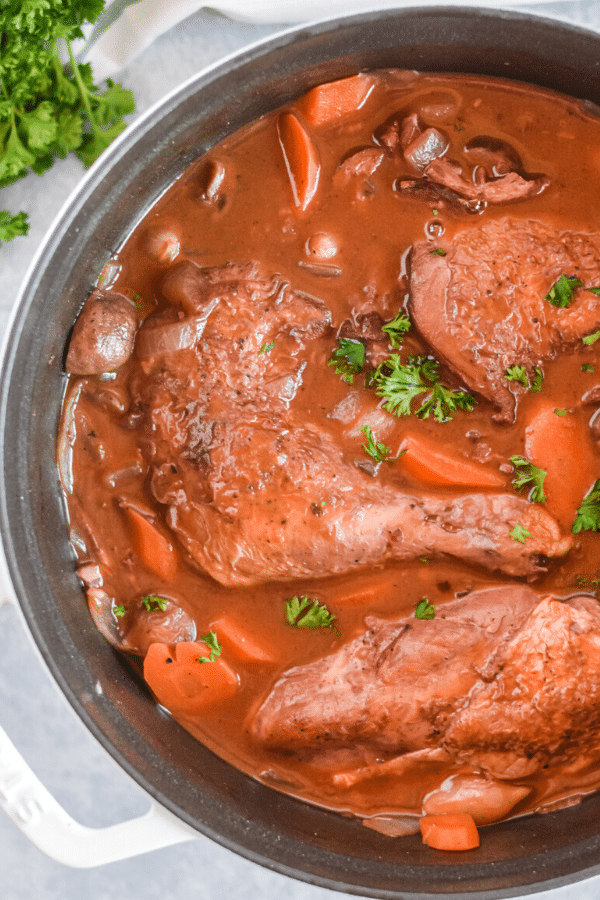 Coq Au Vin is a classic French dish of chicken braised with wine, bacon, mushrooms, garlic and optionally other vegetables resulting in a supremely rich sauce. This recipe is not fussy and Coq Au Vin is easy to make. Most of the cooking time is simply passive cooking waiting for the dish to stew. You can even make this dish in a slow cooker. Our recipe adds Quatre Épices (meaning Four Spices in French), a native French blend that is traditionally used in soups, stews, ragout, and charcuterie, such as pâté and terrines. French cuisine is not known to incorporate a heavy amount of powerful dried spice blends in their recipes, but this spice adds subtle warming notes that complement the rich wine sauce.

Our Quatre Épices blend combines freshly-ground white pepper, ginger, and the warming spices nutmeg, cloves and cinnamon (yes, ours has 5 spices!). Keep this spice handy to sprinkle a little extra over your bowl. Serve Coq Au Vin with crusty bread to mop up the sauce. Or, use the Quatre Épices blend on baked chicken or fish, sprinkle on soups, or add a pinch in your salad dressing, hummus, or eggplant dishes for a pop of flavor.

We recommend using a light to medium-bodied red wine with good acidity. Good wines for Coq Au Vin include: Bordeaux, Pinot Noir, Cotes du Rhone, or a Beaujolais. But don't overthink the wine, as just about any wine including cheap table wine will do.

If you have time, first marinate the chicken in the red wine & chicken stock for a minimum of 20 mins and up to overnight in the fridge. This will give the chicken a deeper red wine flavor and make it feel like it's a part of the stew instead of just chicken with a red wine sauce.

Instead of chicken thighs & legs you can use: chicken legs, or a whole chicken that’s been quartered.

Fry the bacon over medium high-heat in a large dutch oven or stock pot. Once cooked, transfer to a plate and set aside. Leave the bacon grease on the stove.

Add the onion to the remaining bacon grease. Saute for 3 minutes over medium high heat and then add the pearl onions, carrots, mushrooms, and garlic. Saute for 4 - 5 minutes more. Stir in the flour and tomato paste until combined. Slowly pour in the Cognac, red wine and chicken stock. Add the seasonings. Stir to combine.

Add the bacon and chicken back to the pot. Bring the mixture to a simmer, reduce heat to low, cover, and cook for 60 - 80 minutes. The chicken should be cooked through and tender. Serve immediately.