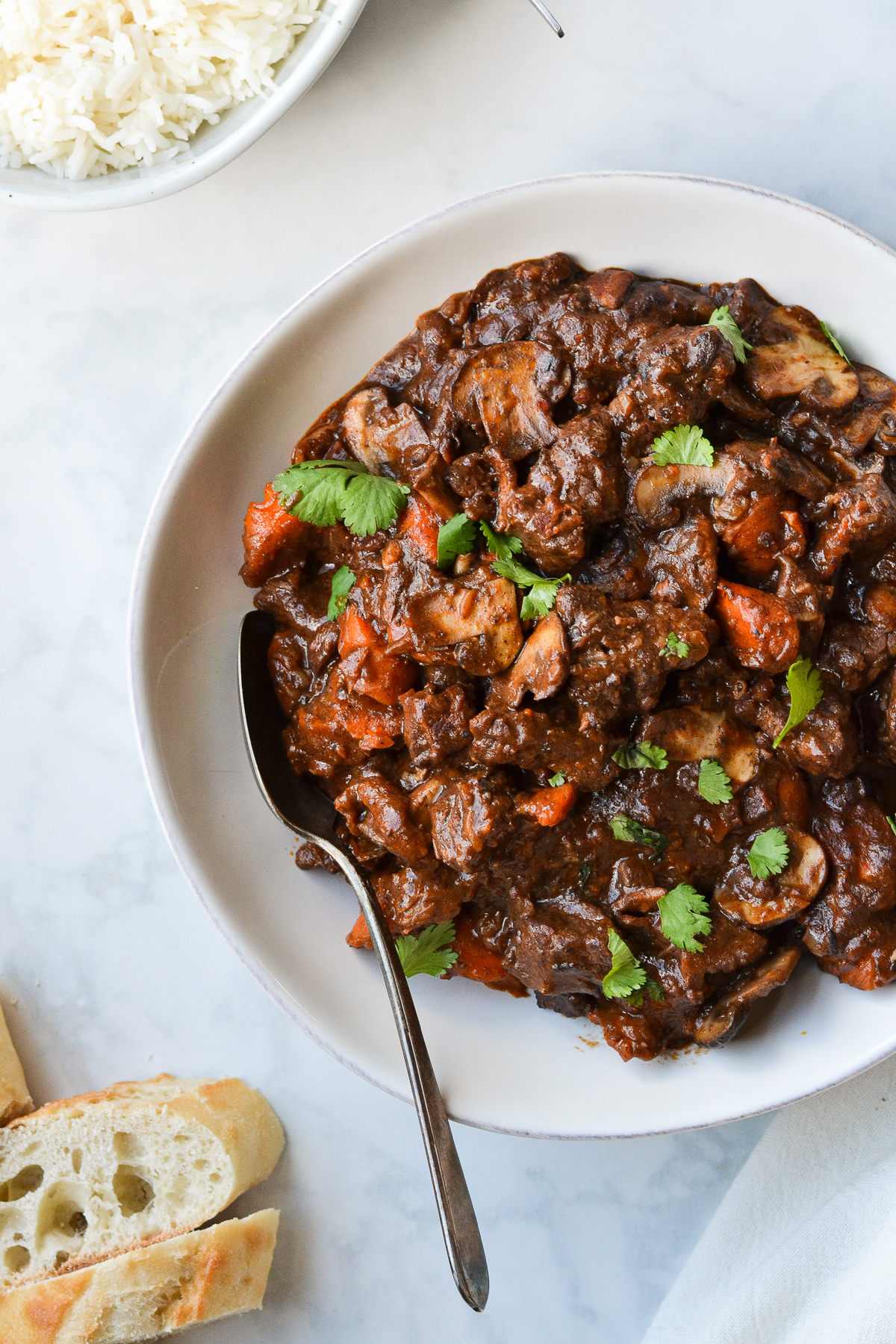 Winter is the perfect time to make heartier meals like stews and casseroles that warm the body as well as nourish the soul. Stews lend themselves especially well to making larger batches, which many argue taste even better as leftovers after flavors have a night or two to congeal. You don't need a slow-cooker to create a delicious stew such as this French classic Beef Stew in Red Wine sauce (although you can use one). Use a dutch oven, your largest skillet, or even a large soup pot to slow-cook your way to a flavor-packed meal.

French cuisine is not known to incorporate many dried spice blends in their recipes, but Quatre Épices (meaning Four Spices) is one native French blend that is traditionally used in soups, stews, ragout, and charcuterie, such as pâté and terrines. Our Quatre Épices blend combines freshly-ground white pepper, ginger, and the warming spices nutmeg, cloves and cinnamon (yes, ours has 5 spices :). For an extra flavor boost, keep this spice handy to sprinkle a little extra over your own bowl. Serve with crusty bread to mop up the sauce.

The Flat Iron steak is a cut of beef from the shoulder of the cow and is also known as a Top Blade steak. Its perfect for stews where the slow, lower cooking temps will produce a rich, tender piece of beef. If you can't find a flat iron steak, you can also use a chuck roast (commonly cooked as pot roast).

Save prep time by asking your butcher to trim the fat and cut the beef into the large 3-4" cubes.

The most important tool in this recipe is the pan. The only requirement is that it has high enough sides so that the liquid (wine) covers most of the beef as it is cooking. Ideally you also have a lid that can help keep moisture in without too much evaporation.

What kind of red wine to use? We prefer richer, more robust red varieties such as Cabernet, Merlot, Zinfandel, Bordeaux, and Côtes du Rhône. But a blended red table wine will work just fine. No need to buy a pricey wine to make a delicious stew.

If you want to use a slow cooker, follow steps 1 to 3 in the recipe (browning meat and sautéing vegetables) then transfer to the slow cooker with the wine and spices. Cover and cook on Low for 6-8 hours or Med for 4-6 hours.

Prep the meat and all fresh ingredients. Heat a large braising pan, skillet (with high sides), soup pan, or dutch oven on Med-High. Season beef with salt and pepper to taste.

Add bacon to pan and cook for 3 mins per side. Drain grease into a safe container. Add the oil then the beef to the pan with bacon in a single layer. Brown beef for approximately 2 mins per side (8-10 mins total). Add the onion and garlic and cook for 5 mins or until softened. Sprinkle flour over the mixture and stir to mix in.

Reduce heat to Med. Add the pearl onions, carrot, bay leaves and Quatre Épices spice blend to the pan and stir. Cook for another 5 mins. Add the wine, taking care not to overfill your pan. Bring to a gentle boil and stir to loosen brown bits on bottom of the pan.

Reduce heat to Low and cover pan. Simmer the stew for at least 30 mins, stirring occasionally. In a medium skillet, stir fry the mushrooms over medium heat. Stir into stew during last 5 minutes of cooking. Serve in bowls with hot crusty bread to mop up the stew. Garnish bowls with parsley.