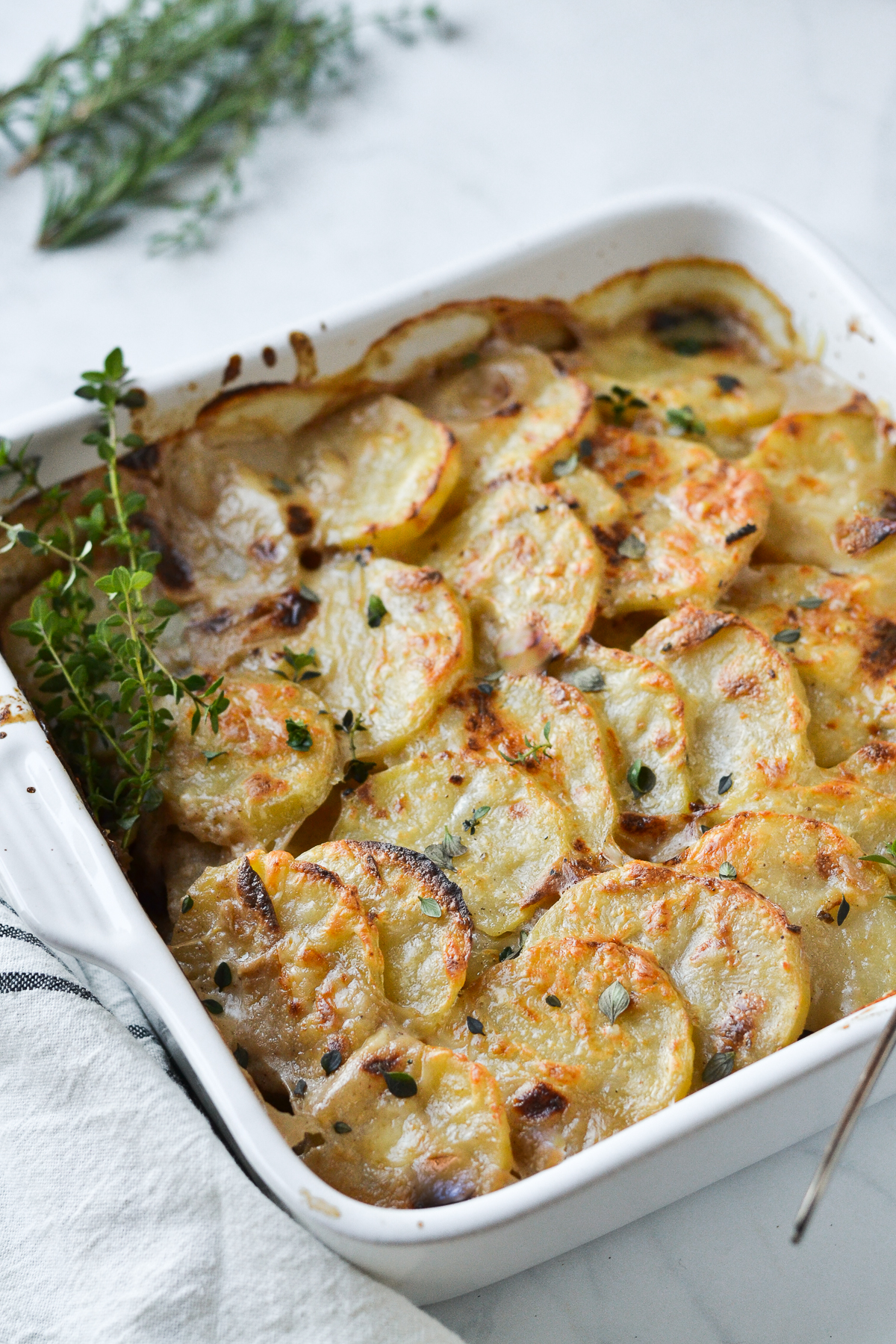 Gratin dishes are casseroles topped with breadcrumbs, cheese, and / or egg to form a golden crust. Gratin Dauphinois, a French recipe of thinly sliced potatoes mixed with cheese and milk is baked to develop a golden brown crust. Traditionally, this dish contained milk and/or cream but no cheese. Today, even the most classically trained French chefs add Gruyère cheese to Gratin Dauphinois. In the U.S., this dish is commonly known as Au Gratin Potatoes. Each bite of tender sliced potato is coated in a delicate, velvety sauce, with subtle hints of garlic. Topped with a crispy golden crust, our recipe for Spiced Gratin Dauphinois results in a wholesome, satisfying meal or side dish.

We spiced our gratin with a French Spice blend known as Quatre Épices (literally "Four Spice"), a blend traditionally used to season soups, stews, ragout, and charcuterie, such as pate and terrines. Our proprietary blend includes a fifth spice, cinnamon, in addition to the traditional white pepper, ginger, nutmeg, cloves. The Quatre Epices blend is also great in baked goods and desserts. Try our Quatre Epices Bundt Cake to bring a spiced holiday cake to your next party.

This is a great make-ahead dish. Simply stop after step 3, cover and refrigerate for up to 1 day. Remove from the refrigerator 1-2 hours before, to bring to room temperature. Continue at step 4.

Preheat the oven to 350 degrees. Peel, rinse and dry the potatoes. Cut the potatoes into thin discs, about ¼ inch. Layer in a large 8-12 quart stock pot. Add milk, salt, pepper and Piquant Post Quatre Epices to the pot with the potatoes. Gently stir to coat. Bring the large pot to a simmer over medium heat. Simmer for about 10-15 minutes until just tender, stirring occasionally.

Using a slotted spoon, transfer the potatoes to the baking dish in even layers. Halfway through the layers, add ½ cup of the shredded Gruyère cheese. Continue layering the remaining potatoes. Pour the milk from the pot over the potatoes. Top with remaining cheese.

Bake for 45 minutes, until cooked through and most of the liquid is absorbed. For a slightly crispy cheese layer, broil for an additional 3 minutes.